Being The Oldest Baseball Club in the Country, Pirates has a lot of history with lots of Highs & Lows.

Over the years Pirates has boasted many Springbok & Provincial Players & Officials, both Senior & Little League And in the Masters Divisions with Players participating overseas including the USA Classics  & World Games. In the 50’s baseball was at its strongest, carrying the Club like rugby does today.

In the 80’s & 90’s Pirates hosted at least 6 Senior Teams & 6 Little League Teams. In the mid  1990’s  the players started getting paid to play which caused a big movement in players. To  Clubs with the most sponsorship.  The Pirates Major League Team up & ducked to the newly formed Randburg Mets Club, leaving  the Social sides to carry the flag for the next 10 years or so.

2009 & 10  after a strong recruitment drive we entered a team into the Major League which finished at the top of the log that year. 2011 the Major League season changed from playing in Winter  to Summer, causing a lot of Politics and the Pirates Majors  moving to play from a school due to the lack of  field availability, clashing With the cricket season.

The Social side grabbed the flag and won the 2011 Reserve Leave Knockout Cup. Currently Pirates is now playing in a lower League  in Winter, from April to September,

Every Sunday  with players ranging from 14 Years to 65 years old.

Get out into the Winter Midday Sun, Bring the Family, Hit a Few Balls, Have a beer & a Braai 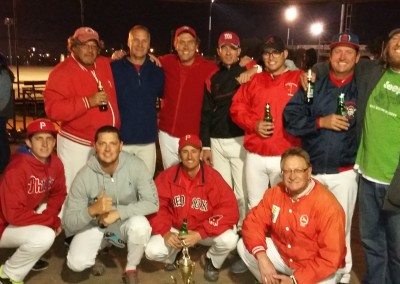